The store will not work correctly in the case when cookies are disabled.
Menu
Tactical gear must be modular to function well in tense situations. Military units and police forces that have to swap out supplies and yet remain mobile often rely on standardized load-bearing equipment, like MOLLE system backpacks. While there are many alternatives to the MOLLE attachment system, its durability and universal nature makes it a clear choice for numerous organizations. 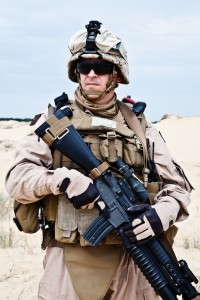 The PALS grid consists of heavy-duty webbing made of synthetic materials. The webbing is arranged along the exterior of a MOLLE-compliant rucksack, pouch or vest in horizontal rows, and each strip is affixed to the item with strong stitching. Because the stitches and webbing are regularly spaced along a 1" x 1.5" grid, PALS can function as a convenient mounting system whose dimensions are standardized. This makes it easier for users to swap out compatible gear at will.


How Is MOLLE Gear Used?

PALS and MOLLE attachments can be affixed to each other in various ways. A special Natick snap connected to a polyethylene strap of fixed dimensions is commonly used for quick convenience. Users who want more permanent fixtures may elect to use a Malice clip, which is similar yet requires a screwdriver to reconfigure. The PALS system also permits users to simply weave the straps attached to their other gear into the grid.

MOLLE standards are increasingly used in non-military applications. For instance, many modern sporting equipment and outdoor gear manufacturers have incorporated PALS or MOLLE-style webbing in their consumer products for improved user convenience.

The standardization of the MOLLE material design definitely plays a major role in its widespread success. Nonetheless, such gear is only as good as the components used to fabricate it. The 1" webbing, for instance, must be of sufficient quality and durability to withstand fraying, since it's usually fixed to the most prominently exposed surfaces of a backpack or ballistics vest. Similarly, it needs to possess just enough elasticity to resist tearing under torsional forces when the wearer is moving around yet avoid stretching to the point that it deforms under the weight of attached gear. Other major material concerns for MOLLE attachments systems include weathering induced by moisture and UV exposure.
Categories: Hook and Loop Uses and Industry Uses For Hook and Loop
Tags: backpack design heavy duty clothing heavy duty webbing military clothing military velcro molle fear tactical gear UV webbing