The store will not work correctly in the case when cookies are disabled.
Menu
Hook and loop fasteners are well-known for meeting diverse needs in multiple settings. Standard products work in many situations, but there are plenty of situations where a specialty fastener can save the day or even a life. Such was the case with an African penguin named Pierre, thanks to the innovative thinking of a concerned biologist. 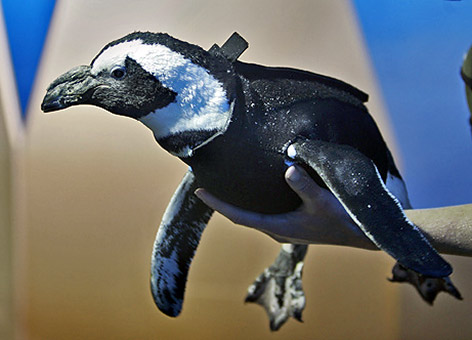 Pierre lives in an enclosure at San Francisco's California Academy of Science. He has a mate named Homey, and over the years, they've produced 16 chicks. For a few years, however, Pierre had trouble with a basic biological function, and it caused the other penguins to shun him. Either he couldn't molt, an annual process of shedding all his feathers, or if he did, he remained bald.

This different appearance made Pierre stand out, which then made him dangerous because he could draw a predator; instinct told the group to reject him. As a result, Pierre lost interest in eating and swimming, and his partnership with Homey suffered.

Then biologist Pam Schaller came up with an idea for a tiny wet suit containing flipper holes to protect Pierre and make him look more like the other penguins. She first tried a zipper closure but soon replaced it with hook and loop; this made all the difference. Pierre kept warm and began to grow feathers. The penguin community accepted him once more. Pierre is now 31 years old, and with the help of hook and loop, and one biologist's ingenuity, he has plenty of feathers again and lives happily with Homey.
Categories: Hook and Loop Uses
Tags: Hook and Loop hook and loop use pierre penguin